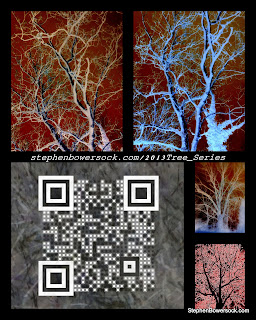 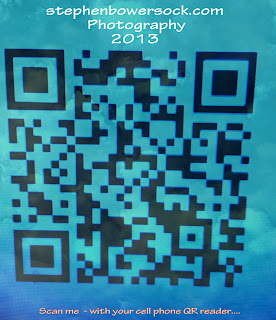 Above you will see my first experimental QR codes combined with a digital photograph.  They can now be used to promote my website . The QR photograph below, is exactly that, a 5 x 7' photograph that I could now post at a local bulletin board, or to be posted as an advertisement anywhere legally done.You could also use regular printing paper rather then using photo paper, as  I did in actuality.
If you are unfamiliar with the QR symbol and it's use then today would be a good day to learn. It is not to say that this symbol is familiar to only a select few, but I do think it still remains a mystery to many.  The usual reaction to the question "what is a QR code/symbol", results in silence, blank stares, "a Q what?" etc. If ask something like,it looks similar to a bar code" and "you see it on mail delivered to your house or business, then the reaction is oh okay is that what they are?"
In  the future people will most likely react with a more positive reaction to what is a QR code?

Why even care about QR bar codes?

1. The trend is strong it will be  around for many years as a Smart Phone application. Propagation of this transfer of information will continue to increase until it is part of the American  fabric of communication via the codes created.
2.QR codes are showing up everywhere. They will soon be on your flat screen as you watch your favorite TV shows and news casts.
3. It will have its uses, it will have it's drawbacks,it will have limitations, but it will be here to stay.

QR code (abbreviated from Quick Response Code) is the trademark for a type of matrix bar code (or two-dimensional bar code) first designed for the automotive industry in Japan......more at Wikipedia,.

What are the QR code uses ? Why would I care?